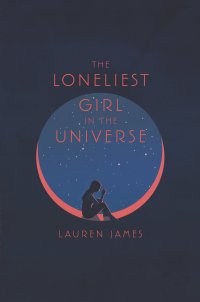 Romy Silvers is the only surviving crew-member of a spaceship travelling to a new planet, on a mission to establish a second home for humanity amongst the stars. Alone in space, she is the loneliest girl in the universe until she hears about a new ship which has launched from Earth – with a single passenger on board. A boy called J.

Based on that summary, you might think that The Loneliest Girl in the Universe is a YA romance novel in a science fiction setting. And in part, you would be right. But one thing that I will say about Lauren James’ is that it surprised me. I went in expecting to get a sweet, simple story about a girl falling in love with a boy she’s never met. But James takes things in a different direction, and the book is stronger for it.

As a girl who hasn’t seen another human face in years, Romy Silvers is definitely relatable, especially considering that I’m writing this under COVID lockdown. The stress and anxiety of extreme isolation is something everyone on the planet understands a lot more now, and on top of all of that Romy has to pilot a spaceship. And you thought Zoom-conferencing was hard.

I don’t want to spoil the plot, but I’ll just say that this book was unpredictable in the very best way. It genuinely surprised me, something that happens rarely enough in literature, and even more rarely with YA novels. James deftly manages to integrate the twists and turns into her prose. At no point did I ever feel lost, or cheated by a cheap twist. Every chapter had me asking new questions, and trying to figure out the mystery behind J and the supposed fall of the American government. And nearly all my guesses turned out to be wrong, which made it even more fun.

So if you’re interested in some not-to-sciencey science fiction that keeps you on your toes and has a strong but relatable main character, I definitely recommend The Loneliest Girl in the Universe.

Also this is super random, but I totally want to write a spin off novel based on the character’s of Loch and Ness.

You can find The Loneliest Girl in the Universe here on Amazon or here on Book Depository.

A Door Into Ocean by Joan Slonczewski

And the Trees Crept In by Dawn Kurtagich

Children of Time by Adrian Tchaikovsky