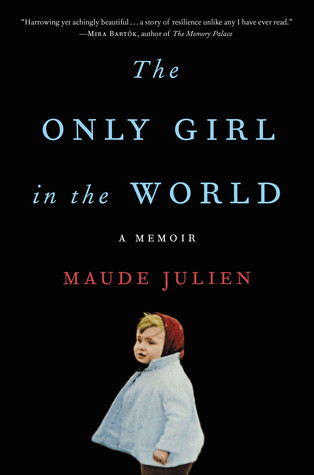 In the tradition of The Glass Castle and A Child Called It, this memoir by Maude Julien is filled with such heartbreaking and harrowing detail that on more than one occasion I had to put it down and walk away. How such people come to abuse their children, and how such children find the strength to survive, are questions often explored in autobiographies and memoirs. But not since Tara Westover’s Educated, which I read and reviewed last year, have I encountered two people less deserving of the word “parent”.

It is obvious from the beginning chapters of The Only Girl in the World that Maude’s father is severely mentally ill. Of course that is just a polite term for “bleeding batshit crazy”, which is closer to the actual definition of Monsieur Julien’s affliction. Years before his daughter was born, he “adopted” a five year old girl from a family that was unable to provide for her. This young girl was groomed in the worst possible sentence of the world; she was indoctrinated to believe that her purpose on Earth was to bear a daughter for her adopted father. She went on to marry Mr. Julien, and bore his child in 1952.

This was a hard read. The entire stomach-twisting saga is narrated in a matter-of-fact manner, as if such things are standard practice. Sadly, the child abuse seen in the introduction it is but the merest inkling of the horrors to come. From the time she was able to walk and speak, Maude Julien was isolated away from the rest of the world in a manor home in Northern France where she was subjected to torture, molestation, starvation, sleep-deprivation, and a childhood deprived of love and affection from any other human.

Thankfully, Maude was born with a deep sense of compassion. Her love for animals and her connection to nature offered some consolation from the rigors of daily life. The second half of the memoir, in which Maude begins engaging in defiance and plans for escape, are much easier to read than the first half. The countless scenes of a small girl being treated with such cruel neglect were often too much, especially combined the rather deadpan narrative work by Elisabeth Rodgers in the audiobook edition. As I said earlier, I often had to pause and resume the story at a later time.

One thing that remains unexplained in The Only Girl in the World is exactly who was Monsieur Julien? With enough money it is said that one is never crazy, only eccentric, and that must have been the only thing keeping him from a mental asylum. But where he was getting all of this money from is never fully explained. I would have liked a little more detail on exactly how someone comes to the belief that their urine has magical properties, but it is more likely that the author simply doesn’t know.

You can find The Only Girl in the World here on Amazon or here on Book Depository. The Audible edition is narrated by Elisabeth Rodgers and is available here.