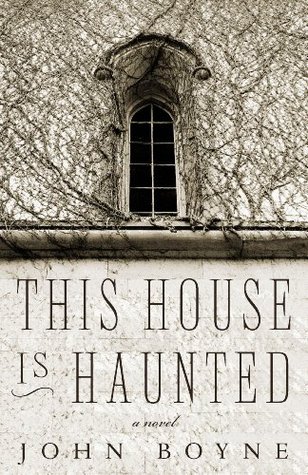 After the death of her father, twenty-one year old Eliza Crane accepts a job as governess to the children of Gaudlin Hall. Upon her arrival at the train station, an invisible pair of hands seize her coat and attempt to push her onto the tracks; she is only saved by the unknowing interference of a local resident. This is only to be the first of many such assaults as Eliza enters Gaudlin Hall to find an oppressive and violent spirit, intent on preventing anyone besides the two children to remain within the walls of the manor.

John Boyne is probably best well known for his award winning novel The Boy in the Striped Pajamas, about two children on opposite sides of a concentration camp fence. Most of his work focuses on historical fiction, and Boyne sticks to his roots with This House is Haunted, adding a supernatural twist. This novel is an homage to the Gothic novels of the Bronte sisters or Rebecca du Maurier.

All of the elements at play for a classic haunted house tale are present in This House is Haunted. Our protagonist, Eliza, is a recently orphaned young woman who accepts a position as a governess to the children of a lonely manor home. Upon her arrival, she finds that the townsfolk speak of the manor, called Gaudlin Hall, in hushed whispers. The children seem to have been left all alone, and no one will tell Eliza the fate of their parents. The children themselves, particularly twelve year old Isabella, speak in riddles and ominous statements. And all of this is in the early few pages, before the supernatural forces that surround Gaudlin Hall make themselves known with a ferocity seldom seen in ghost stories.

Like I said, all of these elements needed for a wonderfully spooky tale are accounted for in This House is Haunted. And yet, it failed to illicit even the smallest shiver down my spine.

Perhaps it was Eliza herself that was somehow lackluster. Her primary characteristic seems to be that she is homely. She is very, very insistent on this fact, constantly lamenting her ugly features which have denied her the prospect of ever becoming married. Because as we all know, only the most beautiful women in history have ever been able to catch a man. Other than plain, Eliza isn’t much else. She is merely a prop that serves the dual purpose of delivering exposition and being attacked by spirits at regular intervals.

Or perhaps it was the lack of descriptive details regarding the manor house itself. Haunted house stories are only as creepy as their setting. There needs to be slow, creeping fog and corridors that seemingly go on forever. There needs to be crumbling walls and menacing portraits and all of the other deliciously atmospheric particulars that raise gooseflesh on the arms and make you reconsider a creak in the night. Some of those details honestly may have been present within the pages of This House is Haunted, but they got lost in the shuffle. I did enjoy one midpoint reveal that winked a tribute to Charlotte Bronte. But sadly, Eliza Crane is no Jane Eyre.

You can find This House is Haunted here on Amazon or here on Book Depository.