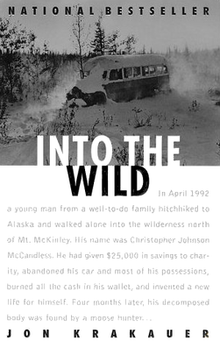 In April 1992 a young man from a well-to-do family hitchhiked to Alaska and walked alone into the wilderness north of Mt. McKinley. His name was Christopher Johnson McCandless. He had given $25,000 in savings to charity, abandoned his car and most of his possessions, burned all the cash in his wallet, and invented a new life for himself. Four months later, a party of moose hunters found his decomposed body. How McCandless came to die is the unforgettable story of Into the Wild. [Source]

“I now walk into the wild.” – Christopher McCandless

The story of Christopher McCandless has become something of an urban legend crossed with a cautionary tale. I’m sure parents have warned their children that if they aren’t careful they’ll end up “dying in a bus somewhere in Alaska”. When I mentioned to my husband that I was reading this book, he scoffed and muttered something about idiot kids and white privilege. For some, McCandless is a cultural admonition about the foolishness of youth. For others, he is a symbol of wanderlust, that powerful urge to explore the wild places of the world and reconnect with nature that exists somewhere within all men.

It’s easy to write McCandless off as just a spoiled boy from an affluent background who got what he deserved when he walked into the Alaskan wilderness with no supplies. It’s easy to say that he was mentally ill, or suicidal, or just plain crazy. What Krakauer has done with Into the Wild is to tell the harder story, one of a charismatic and talented young man whose obsessive desire to connect with nature ended up costing his life.

“At long last he was unencumbered, emancipated from the stifling world of his parents and peers, a world of abstraction and security and material excess, a world in which he felt grievously cut off from the raw throb of existence.”

Last year I read Krakauer’s Under the Banner of Heaven, which chronicles the violent history of the Mormon faith and how it led to the death of an innocent woman and child. Krakauer has the remarkable ability to write nonfiction as if it were fiction. He weaves his plot and characters together with meticulous attention to detail and exhaustive research. Reading Into the Wild, it is obvious that Krakauer was profoundly moved by the death of McCandless. The book represents an homage of sorts, a chance to tell Christopher’s story in a way that makes him look brave but naive instead of just incredibly stupid. Krakauer brings a sense of tragic nobility to Christopher’s life and death while trying to explain what drove him to venture alone into the wilderness. He looks at journals, interviews friends and family members, and ultimately journeys to the hollowed out bus where McCandless’ body was found.

I am writing this review more than five days after finishing it, and I can’t get Christopher McCandless out of my head. At random times of the day, when I’m washing dishes or marking homework, the image of a lonely boy dying in a lonely bus in a cold, lonely forest comes into my mind. I had before heard the story of the idiot kid who died in the wilds of Alaska. Now I feel like I actually know the story of McCandless’ life. This book was amazing.

You can find Into the Wild here on Amazon or here on Book Depository. In 2007 it was adapted into a film starring Emile Hirsch and directed by Sean Penn.