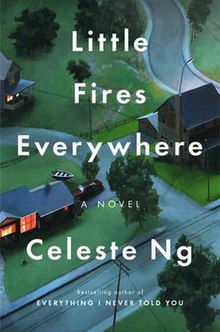 In Shaker Heights, a placid, progressive suburb of Cleveland, everything is meticulously planned – from the layout of the winding roads, to the colours of the houses, to the successful lives its residents will go on to lead. And no one embodies this spirit more than Elena Richardson, whose guiding principle is playing by the rules.

Enter Mia Warren – an enigmatic artist and single mother – who arrives in this idyllic bubble with her teenage daughter Pearl, and rents a house from the Richardsons. Soon Mia and Pearl become more than just tenants: all four Richardson children are drawn to the alluring mother-daughter pair. But Mia carries with her a mysterious past, and a disregard for the rules that threatens to upend this carefully ordered community.

When the Richardsons’ friends attempt to adopt a Chinese-American baby, a custody battle erupts that dramatically divides the town and puts Mia and Mrs. Richardson on opposing sides. Suspicious of Mia and her motives, Mrs. Richardson becomes determined to uncover the secrets in Mia’s past. But her obsession will come at unexpected and devastating costs to her own family – and Mia’s.

How much time has to pass before a time period can be considered historical fiction? This novel, which is set in the mid 1990’s, often felt like a time capsule. The whole world sat perched on the edge of a technological whirlwind which was about to change how we communicate, travel, work, and live. The setting does not play a major role in the proceedings except perhaps to show how much the attitudes of middle class white families have changed over the past twenty years, but the occasional references to President Clinton and outdated technology were kind of fun.

Little Fires Everywhere‘s plot does not move at a breakneck pace; instead it settles in for the long haul and prefers a story well told. Celeste Ng is an author who cares very deeply for her characters, and this love and attention to detail comes through in her writing. I felt a strong emotional bond with Izzy, who is struggling so hard against the regulations of her parents. I also identified with Pearl; I was often the new girl at school and it’s never easy. I admired her easy self-confidence as much as I understood her desperate need to be part of a group of friends.

I really enjoyed this novel. It was surprisingly funny and occasionally heart-warming. I think that it could have many interpretations based on where a person is in their life.

You can find Little Fires Everywhere here on Amazon or here on Book Depository.