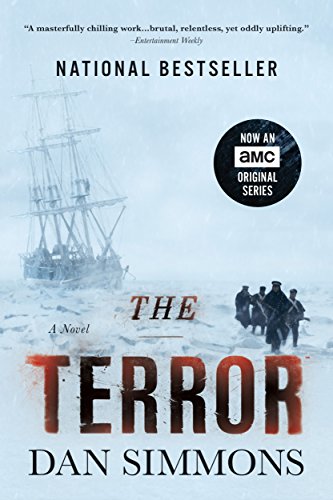 In 1845, the HMS Erebus and the HMS Terror departed from England with one hundred and twenty-nine men on a three-year expedition to finally discover the illusive Northwest Passage. The leader, Captain John Franklin, had previously served on three Arctic expeditions, and was the commanding officer on two. Laden down with years worth of food, oil, and coal, the two ships were the pinnacle of British shipbuilding technology.

Both ships became trapped in the ice near King William Island in the winter of 1846. They never moved again. There were no survivors.

Dan Simmons blends historical fiction and horror to recreate the final years of the doomed Franklin expedition, and adds in a supernatural twist. The endless dark and freezing cold of the pack ice is home to a creature of terrifying size and intelligence that is stalking the men in the endless night of Arctic winter.

Simmons treats the environment surrounding Terror as a living thing, constantly growling and shifting to create sudden upthrusts and hidden crevices.  The polar region is one of the most unforgiving places on the Earth, and it is immediately apparent that Franklin and his crew are out of their depths. The ever-moving ice remains implacable in the face of their modern British inventions. After months pass trapped in ice, a summer passes without an escape route emerging. Food rations begin to run low, and mutterings of mutiny can be heard belowdecks. The beast on the ice quickly becomes the least of their worries.

My only negative issue with The Terror is its length. Nearly seven hundred pages is a long time to read about ice. Simmons occasionally becomes repetitive; there are only so many ways to detail a group of people with sinking morale and empty bellies. I enjoyed his use of multiple perspectives, but some of the voices didn’t serve a purpose in furthering the overall plot.

I find myself liking The Terror more in retrospect than I did while actually reading it. I found the length and some of the more meandering narratives a bit frustrating at the time, but I keep finding myself thinking about the fate of the HMS Terror and the horrible conditions that these sailors found themselves unable to escape. This will be a novel that I’ll remember on cold winter nights.

You can find The Terror here on Amazon or here on Book Depository.