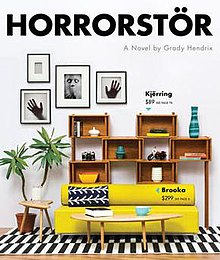 Odd things have been happening at the Orsk store at night. Merchandise is being destroyed. Disturbing graffiti turns up in the restrooms. A foul smelling substance is being smeared across the furniture displays. Hoping to avoid being fired for lackluster performance, Amy volunteers along with two other employees to stay overnight in the Orsk store in order to unravel the mystery of the phantom vandal.

The idea of a horror novel set in one of the most banal of locations (a knockoff IKEA store) in one of the most banal of regions (Cleveland, Ohio) tickled my fancy right from the start. The first half of Horrorstör has a joyful time poking fun at big-box consumer culture, including excerpts from the Orsk catalogue, the Orsk employee handbook, and a map of the Cleveland store. Amy’s boss quotes from the Orsk customer service guide as if it is the Holy Bible. Basically, all of the characters in Horrorstör are walking caricatures, including protagonist Amy as the disgruntled slacker who believes she has settled for a job that is unworthy of her talents. Author Grady Hendrix drops bread crumbs of spooky happenings once in awhile, but dedicates the first hundred or so pages of the novel to roasting the retail environment and those who dwell within its overly lit halls.

The second half of Horrorstör takes a sharp turn into a paranormal ghost story. Turns out the executive bigwigs at the Orsk corporate office didn’t pay close enough attention when they paid bottom dollar for their newest store. They built their Cleveland location on the grounds of a former prison which was ruled by a sadistic and cruel warden. Now the spirits of the warden as well as the disgruntled inmates are roaming the Bright and Shining Path of the Orsk store. Only they’re looking for blood rather than bookcases.

Both sections of Horrorstör work on their own, but I’m not sure they work together. The beginning has a wry, tongue-in-cheek tone that is utterly lost once the main ghost story begins to pick up pace. Hendrix spends a bit too much time playing with his setup, and fails to build up any suspense in the early pages. The second half of the novel is a series of claustrophobic and tense chase scenes that include quite a bit of uncomfortable physical horror. But because we didn’t spend that much time getting to know the characters as anything other than caricatures, we’re never terribly invested in their fates.

Overall, I liked Horrorstör better in concept than in execution. The comedy and horror work against one another as opposed to in harmony, and the juxtaposition was too sudden and jarring.

You can find Horrorstör here on Amazon or here on Book Depository.