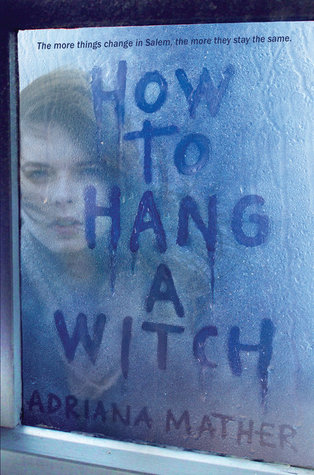 Samantha Mather has always known that she’s a distant descendant of Cotton Mather, one of the main instigators in the Salem Witch Trials, but it never seemed to matter when she lived in New York City. But now, with her father in a coma and medical bills running high, Sam and her stepmother Vivian are moving to Salem to live in her deceased grandmother’s house. When she begins attending the local high school, Sam realizes that there is still a lot of resentment towards the Mather name in the town. Soon the trials of high school begin to feel more and more like a modern day witch hunt. And it doesn’t help that her new house seems to be haunted.

The author of this novel is Adriana Mather, a direct descendant of the Mather family whose roots go back fourteen generations to the early Puritans of New England. The present-day Mather has said that she wrote How to Hang a Witch to draw parallels between the infamous witch trials of 1692 and modern day bullying. The connection may be a valid one, but Mather lacks the necessary subtlety in her writing and chooses instead to bludgeon her readers about the head with the book’s moral lesson.

While reading this novel I was strongly reminded of a post I wrote earlier this year about the enduring popularity of R. L. Stine’s Goosebumps books. This book ticks off several of the criteria that I listed for a children’s scary chapter book. The protagonist is the new kid in town. She is treated unfairly by the majority of the her peers for no apparent reason, but it immediately befriended by others, also for no reason. At around fifteen years old, the characters in How to Hang a Witch are older than in Stine’s books, so there are some curse words thrown in as well as a few halfhearted and determinedly chaste romantic scenes.

There’s also the extreme lack of adult support, which is where Adriana Mather’s bullying allegory falls flat. Sam’s teachers are downright cruel to her, which worked for Stine because such behavior could have possibly flown under the radar back in the ’90’s. In today’s world, if a teacher treated their students with the outright disdain that Sam is treated, it would be trending on Buzzfeed by the end of the day and the teacher would be out on their ass. Instead, a fellow student literally hangs Sam in effigy and the teacher doesn’t bat an eye. It’s entirely unrealistic, and it really took away from my enjoyment of this novel.

Furthermore, I’m not sure that the author has ever spoken to a teenager. The dialogue is very clunky and contains slang that spans the past fifteen years. Witches are an enduring part of supernatural lore because of their mystery and power. For hundreds of years they have struck fear and superstition into the hearts of humanity. Here, they are reduced to a group of snarky young girls who wear too much eyeliner. It was all a bit unfortunate, really.

At the end of the day, this novel was just a tad too far on “young” side of the Young Adult spectrum for my taste. I’m sure it would be very enjoyable for someone in seventh or eighth grade, and might even help them to learn about a very interesting time in American history.