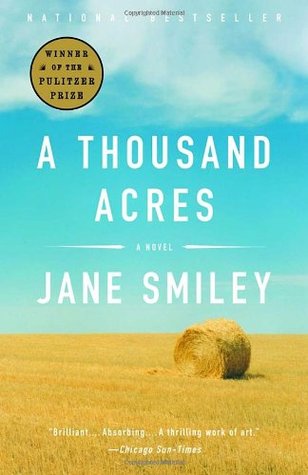 Larry Cook has decided to retire and turn his three-generation Iowa farm over to his three daughters. When the youngest daughter, Caroline, does not react with what he deems to be the appropriate enthusiasm, Larry cuts her out of the deal. This triggers a chain of events that will rock the lives of Ginny and Rose, his elder daughters, as well as their husbands and children. They find themselves struggling to cope with their aging father, their angry younger sister, their respective husbands, and the demands of running a vast acreage with little help from their community.

I was initially attracted to this novel because it’s set in the farmlands of Iowa. As a child of the American Midwest, I love to see this much-ignored region represented in popular fiction. Author Jane Smiley does a great job of setting the scene of a farming community. Iowa is where endless fields meet endless sky, and the weather is fickle on the best of days. Smiley’s descriptions of Zebulon County and its inhabitants made me nostalgic for my hometown. Except perhaps without the overbearing humidity.

A loose retelling of Shakespeare’s King Lear, this novel focuses on middle child Ginny as she is forced to come to terms with the failings of her family. After nearly forty years of dealing with her father’s unreasonable demands, she has her feet firmly planted on the path of least resistance.  Ginny is passive to the point of submissive, and her main reaction to any given problem seems to be to sweep it under the rug and smile. The more interesting parts of A Thousand Acres deal with Ginny when she stands up for herself and begins to assert her dreams and desires for her own future.

Unfortunately, those moments don’t arrive until the last third of the book, and the first two hundred pages failed to capture my interest. I think Smiley may have been striving for a slow and creeping sense of desperation, but A Thousand Acres continually comes across as tedious. Imagine the plot as an old farmer, content to plod along without much emotion or action as he methodically carries out his daily tasks. Said farmer is respectable and worthy of admiration, but I’m not sure I would want to spend too many hours in his company.

This novel won the 1992 Pulitzer Prize. There is an inherent anxiety present when reading a book that has won such high accolades. In a sense, one feels that if they do not enjoy said novel, it must be they who is in the wrong. There must be some hidden layer of meaning, of depth that the critics saw that they cannot. In the words of a thousand pedantic literature majors, perhaps I just didn’t get it.

Well I didn’t. I found myself falling asleep while reading this book, and ended up having to read it in daily twenty page increments to resist the urge to simply put it back on the shelf.

You can find A Thousand Acres here on Amazon or here on Book Depository. Make sure to buy a strong cup of coffee along with it.

One thought on “Book Review: A Thousand Acres by Jane Smiley (1991)”