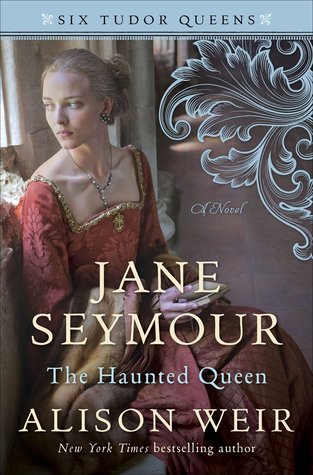 The third wife of King Henry VIII, Jane Seymour was the Queen of England for barely more than a year. Having served in the court of both Katherine of Aragon and Anne Boleyn, Jane saw the fall of both women when they failed to deliver an heir for their King. She was widely praised for her virtue and devout Catholic faith, and clung to her religion even as Henry broke with the Roman Catholic Church. She died of complications following childbirth at only twenty-eight years old. Renowned historical biographer Alison Weir writes a fictionalized account of Jane Seymour’s life as seen through her eyes.

This is the third installment in Weir’s Six Tudor Queens series. I’ve read and enjoyed the previous novels, and was interested to see how Weir proceeded after the tumultuous and widely documented reigns of Katherine of Aragon and Anne Boleyn. Not nearly as much is known about the life of Jane Seymour, given that she was married to King Henry for a mere eighteen months. I was surprised, therefore, when I picked this book up from the library to find out that it was nearly six hundred pages long.

How do you write a six hundred page fictional biography on a woman’s life that is not well documented? Turns out, you add an insane amount of extraneous detail, milk any morsel of archival evidence, and generally drag things out far longer than is necessary. Reading Jane Seymour felt like an exercise in extreme patience at times, since Weir seems to be striving for a nearly day-by-day record of Jane Seymour’s life during leading up to an including the death of Anne Boleyn.

I think part of the problem is that of all Henry VII’s wives, Jane Seymour is the least interesting. The letters and documents that mention her all describe her as “devout” and “pious”. She was not well-educated like the two queens who came before her, so we simply don’t know if she had strong opinions on anything other than her Catholic faith. And because Jane is defined by her religious devotion, she makes for a rather nondescript character. She lacks the fierce fight and devotion of Katherine of Aragorn, or the wild chaos and manipulative personality of Anne Boleyn. She is simply plain Jane. Weir seems to  understand this, and a great deal of her novel is focused on Katherine and Anne’s tumultuous and historical battle for control of the King. At times, Jane feels like a supporting character in her own narrative.

Jane’s primary character traits are her devotion and her dutifulness. She never seems to take any initiative in deciding her own fate, instead allowing others to take agency over her future. I had to fight the urge to begin taking tally of the amount of times Jane is described as “lowering her eyes” when others are discussing key religious or political ideals. The emotion she seems to convey the most strongly is pious indignation over the sins of others. Which doesn’t make for a terribly interesting protagonist. Instead, Jane feels for all the world like that one coworker we’ve all encountered who smugly informs you that your various sins have condemned you to hell.

I’ve read several of Alison Weir’s books, both fiction and nonfiction. I’ve always appreciated her attention to detail and her dedication to research. The Tudors and their court are often sensationalized as a historical Harlequin romance novel or a medieval soap opera. Weir grounds her novels in historical fact, even if this means that some of the sex appeal is lost. She does her best with the third wife of Henry VII, but ultimately there isn’t enough research available to maintain the narrative. I wonder why she felt the need to make this novel six hundred pages long, when half that length would have told the story equally well.

You can find Jane Seymour: The Haunted Queen here on Amazon or here on Book Depository.