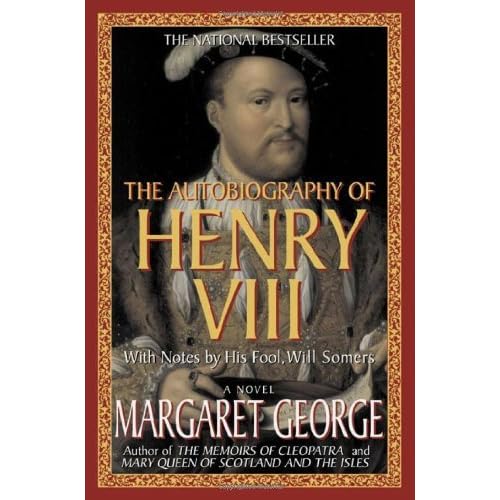 Like so many others, I have always been fascinated by the story of the Tudors. As a child, one of my first forays into historical fiction was the story of Elizabeth I from The Royal Diaries series. I have read most of the Philippa Greggory novels, as well as several by Alison Weir. Even though I’m about as familiar with the history of the Tudor dynasty as it is possible for a non-academic to be, I was still excited to sink back into their world when I picked up Margaret George’s The Autobiography of Henry VII.

This was my fourth novel by George, so I was not surprised to see that Henry VIII was over nine hundred pages of small print. All her books are enormous, and in my opinion she could definitely use a more stringent editor. The amount of detail presented in George’s novels is both impressive and frustrating. She obviously does an incredible amount of research for her books. The question is just whether or not the reader needs that much detail.

Henry VIII’s most memorable legacy is undoubtedly the fact that he had six wives, and had two of them executed. Most books about this time period focus on his tumultuous love affair with Anne Boleyn which resulted in England’s break from the Roman Catholic Church. I was therefore surprised to find that this novel was not a love story in any way. Instead of pages and pages about the passionate relationship between the king and the commoner, Henry VIII chooses instead to focus on the religious aspects of the matter. The wives are relegated to the background for long periods. The formation of the Church of England with King Henry at its head is given a lot of attention here. Rather than love, one almost gets the sense that Henry breaks with Rome due to a childish temper tantrum.

The most interesting parts of this novel detail the mental jumping jacks Henry needs to perform in order to justify his actions. The Henry of this book is presented as insecure and lonely, surrounded by sycophants and unable to trust anyone. His early desire for a father figure leads to his close relationships with people like Thomas More and Thomas Wolsey. The fact that he destroyed the lives of both these men (and all of his wives) is important to note. But we are all the heroes of our own narratives, and since this novel is told from the periods of Henry VIII, we are treated to all manner of rationalizations for these actions. The way he tells it, everything happened for a perfectly logical reason.

Why are we so intrigued by the Tudors? Part of me wonders if it isn’t the same reason why people love to watch the Kardashian family bickering, or the drunken antics of the Jersey Shore cast. We love to see privileged people behaving badly. It gives us a sense of moral superiority. In the case of King Henry VIII, his reign also represents a time of extreme religious and political upheaval. After all, Protestantism was able to gain a foothold in Europe due to the actions of one man who loved one girl.

Margaret George’s The Autobiography of Henry VIII represents another satisfying addition to the historical fiction focused on the Tudors. However, it is far too long. I would recommend it to someone who was incredibly interested in this time period, but it’s definitely an undertaking.