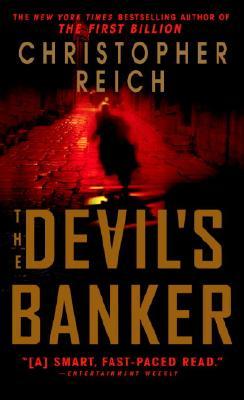 If post-9/11 hysteria ever attained sentience and wrote a novel, it would bear a striking resemblance to Christopher Reich’s The Devil’s Banker. Here can be found all of the elements that would make any upstanding rifle-toting American break into a sweat. A secret Muslim terrorist group. A bomb detonation on the streets of a major city. A radicalized youth with plans for murder. And only a few dashing patriotic government agents racing against the clock to foil their plots and save the day.

This was the January pick for my monthly book club, and it marks my very first foray into the world of spy-thriller novels. I’ve avoided them like the plague in the past, and at least now I can say that my reluctance was wholly justified.

Holy anti-Muslim sentiment, Batman! Within just the first few pages we’re introduced to one radicalized man who is plotting to “kill the infidels”. He is quickly joined by a threateningly shadowy group of other Muslims who also hate our beloved Western values. They all have names like Mohammed Al-Saleeb Al-Mohammed and exist only to be thwarted at the proper moment by our democracy-loving group of agents.

In this novel, all Muslims are hell-bent on the destruction of the Western world. The French are surrender monkeys. The British are only as useful as their alliance with the United States. Torture is totally acceptable as long as they get the answers they need. The Patriot Act is touted as the most sacred doctrine since the Declaration of Independence. At one point a character unironically states:

If you’re not stepping on someone’s rights, you’re not doing your job”

Seriously everyone, this book pissed me off. I get that this was written in 2003, when the U.S. was still recovering from the September 11 attacks. I get that the spy-thriller genre needs a villain. And I get that this genre is primarily targeting men who perhaps will enjoy the “chase” and not focus so much on the glaring xenophobia.

But I couldn’t. And I have to ask, are all the books in the spy-thriller genre this repulsive?

You can find The Devil’s Banker here on Amazon or here on Book Depository.

2 thoughts on “Book Review: The Devil’s Banker by Christopher Reich (2003)”