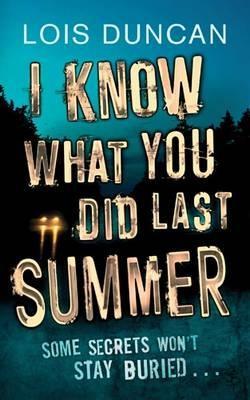 I found this book on a Buzzfeed list and my immediate reaction was “What! That’s a book!?” The slasher film of the same name was one of my favorites when I was a teenager. I immediately wait-listed it at my local library and it came in just in time to be my second book of the new year.

Before I can even begin reviewing, I have to explain something about this novel. It was originally published in 1973. The movie came out in 1999. Then, the book was re-edited and re-released in 2010. This was apparently to update the novel for modern audiences. because it would seem that modern teens just cannot envision a world without their precious technology. So there are now references to texting, Google, and web-chats. I was so incredibly confused when I started reading this book, because I knew the film came out in ’99 when the internet was in its infancy and texting was most definitely not a thing. I had to stop and dig around just to prove to myself that I wasn’t crazy.

The novel focuses on four high-school aged teenagers who try to cover up a terrible crime, only to find it haunting their steps a year later. When threatening messages begin turning up at their houses, they realize that their past has returned to take revenge. Sound familiar? That’s the basic plot of the film. However, that’s where the similarities end. The ice-pick wielding fisherman is nowhere to be seen. The person killed in the opening scene is not a young man named Ben. Spoilers? Not really. The movie is twenty-years old. Come on.

I really wish I had managed to obtain the original copy of this book. It is glaringly evident that random changes have been wedged in wherever the publishers and Lois Duncan thought they could fit. We have vague descriptions of texting and webcasts, but it’s then followed by a conversation about whether or not it’s okay for a married woman to work. It’s 2010 technology squished together with the dumb machismo of the early 1970s. One character keeps mentioning that he is a veteran from Iraq when it’s almost painfully obvious that he is describing the Vietnam War.

I don’t know why the publishers thought it would be a good idea to “update” this novel. It seems like a mixture of a cash-grab and a “those young folks will never understand a world without iPhones!” Heads up, young people are way smarter than you think. They are perfectly capable of putting their imaginations into an historical context. It’s a little condescending that anyone would feel the need to shoehorn in a Google reference here and there just to make their book feel “relevant”

My rating: 2/5 for the 2010 revision. I’ll update if I ever get my hands on the original version.

You can find I Know What You Did Last Summer here on Amazon or here on Book Depository.